Magnets are most often used to attract two or more objects – from your refrigerator magnets and cabinet latches to large magnetic cranes. Two magnets (or one magnet and a piece of metal) are aligned with a certain distance and they couple with normal magnetic force to attract to each other. However, the magnetic shearing force is not as well-known as the magnetic normal force. When we shift one magnet in-plane, the other magnet will provide a shear force that tries to push/pull based on the orientation. The magnetic shearing force has many applications such as in electric motors. It is important to understand how the horizontal shifting of magnet will influence the normal and shear magnetic force.

Assume we have two identical magnets (5mm x 5mm x 1mm with direction of magnetization through the smallest dimension) with a 1mm working gap between them. If we start to shift one magnet horizontally, the following graph shows how the normal force and shear force change as the horizonal shift increases. 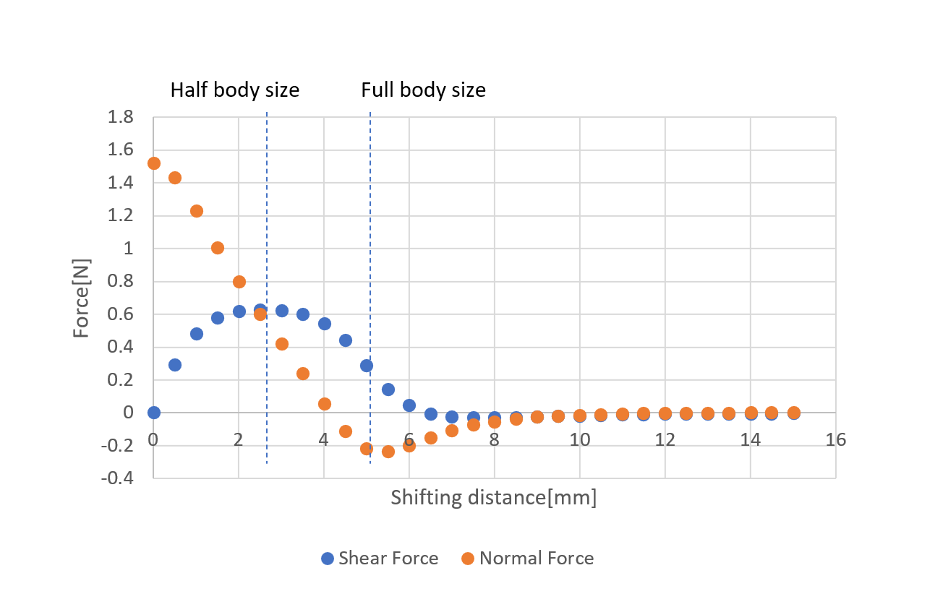 There are a couple of interesting observations that can be made. First, at zero shifting distance, there is no shearing force, and the normal attraction force is at its maximum. Magnets of equal area will want to center line-to-line, creating no lateral forces. As the top magnet starts to shift horizontally, the shearing force start to increase - the bottom magnet wants to pull the top magnet back to the center. The peak shearing force occurs when the center of top magnet is at the edge of the bottom magnet, halfway misaligned, then the shearing force starts to decrease and eventually goes to zero. The shifted magnet is attempting to minimize distance of the flux lines, which are continuous and do not cross. As they flow from one side of the magnet array to the other, they do so in an elliptical shape that the shifted magnet is opposing. It is bending the flux lines between the two magnets as it is shifted. It tries to re-align center-to-center with the shear force to straighten these lines. Free magnets will align themselves so that flux density between them is maximized (the flux lines are as short and tight as possible), this is the position of lowest potential energy.

As for the normal attracting force, it continues to reduce as the magnet is shifted horizontally; to the point that they are no longer attracting and even start to repel. There exists a zone that the two magnets repelling each other until the force is reduced to zero when the distance is extreme. After the halfway point, much of the shifting magnet is now facing flux lines travelling the opposite way. They have curved from the top corner of the stationary magnet to make their way to the bottom corner. Since the flux lines cannot cross, the opposing lines are forced down and the shifting magnets lines are forced up, creating a repelling force. This starts where the shifting began, but eventually overwhelms the remaining holding force.

There are a few important conclusions of during the horizontal shifting of magnet. First, the maximum shearing force always happens around the half body size shifting no matter the scale of the magnets. Second, the normal force can either become attractive or repulsive based on the shifting distance and the repulsive force zone peak happens around the one body size shifting. If a designer keeps these concepts in mind, they can create systems that utilize shear force and normal force for more interesting applications. In this experiment the shifted magnet was locked in the working gap (axial) direction and forced to shift incrementally as the forces were measured (simulated, not empirical). A magnet with multiple degrees-of-freedom would react differently.

At Quadrant, we design our magnets with the full range of factors in mind, contact us to learn more.