Soft magnets are ferromagnetic materials that are easily magnetized and, in most situations, do not retain magnetism after the exciting field has been removed. They typically become saturated relatively easily, meaning that they reach their maximum intrinsic flux density and their relative permeability approaches 1. These materials are characterized by thin hysteresis loops due to their low coercivity, resulting in magnets that could also be easily demagnetized. While a hard magnet would have a hysteresis loop that is wide (relatively) and would therefore be more difficult to demagnetize. There is some overlap in these definitions, and for this reason, a hard magnet may be considered a poor soft magnet and a soft magnet may be considered a poor hard magnet.

Saturation occurs when the relative permeability drops to 1 and therefore no additional intrinsic magnetic induction (J) is observed. When a magnet becomes saturated it means that the material has reached a point in which induced field is directly 1:1 proportional with any additional external magnetic field (H). Since saturation can differ due to the size, shape, and material it can be beneficial to understand how they affect the soft magnetic material.

Most often, the soft magnet does not fully saturate but only a portion becomes saturated, this is due to the magnetic field that would be required to further magnetize the magnet. Although the material is not fully saturated throughout, the areas without saturation often do not add much to the attraction force since flux is taking the path of least reluctance. Instead, increasing the thickness of the material may increase the area of importance that will contribute to the attraction force. In this example we are using a soft magnet, between two hard magnets, as a shunt material, to increase their efficiency.

Here two types of materials are used to portray the saturation of soft magnet materials. The first material used was CR1010 or cold-rolled low-carbon steel the steel containing less than 0.1% carbon. The thickness of the material helps determine whether the material will become saturated. In the case of CR1010, it is found that the steel is saturated and the magnet circuit is being held back at 2mm thick. The steel reached saturation at 2.1mm thickness and when the thickness is increased further, the steel is larger than necessary. The holding force at 2mm thickness is found to be less than at very near saturation because the magnets operating point is lower (less flux in the circuit) but after the steel becomes under-saturated it levels off at 1.87N (meaning the shunt is being underutilized). This holding force is only 0.01N higher than at just saturation implying that making the material thicker is potentially wasting resources, material, space, or weight. This can also be seen with S430 steel or stainless steel 430 where it achieved saturation and held the circuit back at 2mm thickness. While at 3mm thickness it just reaches saturation. Any additional increase to the steel shunt results in it becoming undersaturated. The holding force is seen to level off at 1.78N. Using a soft magnet that does not have adequate volume will result in the field being larger than one that would saturate the shunt and the magnet will be forced to lower its operating point leading to limited holding force. While on the other end, a soft magnet with a large volume will result in no additional holding force due to undersaturation. As can be seen in the following holding force charts: 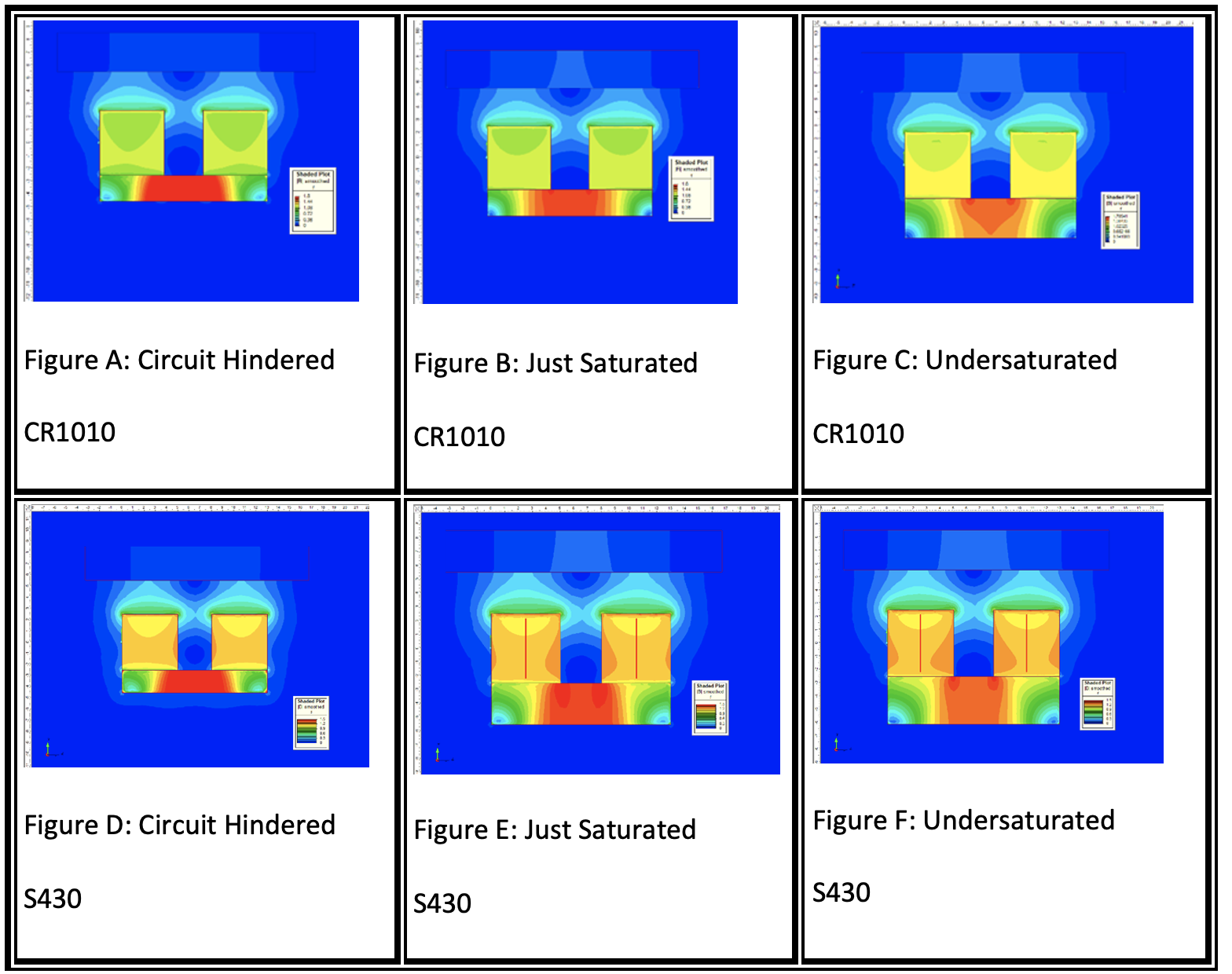 It is important to choose material that is best suited for the need to prevent altering the size of the soft magnetic material and further affecting the cost of production. Conatct us to learn more about our soft magnetic solutions.